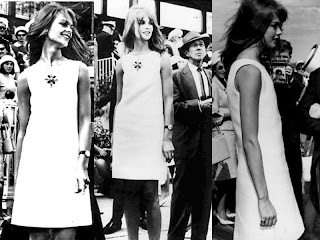 In 1965, British model Jean Shrimpton attended the annual Derby Day event at Melbournes's Flemington race course. Oblivious to the conservative society's standard of dress and decorum, she arrived without a hat or gloves, and wore a short dress that accentuated her shapely bare legs. Although the fashion world had tried to introduce the mini skirt before, the idea was met with only a lukewarm response. After Shrimpton's appearance, and the news and controversy she unwittingly sparked, the mini skirt was officially 'in.'
Posted by Susan at 3:39 PM
Labels: Design, history, vintage

I love your site, It is a pleasure to visit.

I have added your site to my site.

Please link my site to your site.